On the occasion of the first anniversary of the Stateside Madness Podcast, our British cousins at the Madness Information Service published this interview with hosts Laurie and Poly in the weekly M.I.S. Online newsletter. Read on as our podcasters share their thoughts on this occasion, which just so happens to coincide with hitting the milestone of 5,000 downloads!

M.I.S.: How did the Stateside Madness Podcast come about?

Laurie: The initial idea came about as a result of the COVID-19 pandemic. Madness’ American tour dates were all postponed until 2022, so we needed something to keep ourselves occupied. We wanted to come up with something that would help us battle our COVID isolation and connect with other Madness fans. I had just started regularly listening to a weekly music podcast about another band, and the idea hit me: why not a podcast devoted to Madness?

Poly: Laurie came up with the idea for the podcast and wanted a co-host. Like all things originating in the 21st century I had no idea what a podcast was. I was thinking “radio show,” like “wacky morning DJ.” So, being a pompous windbag, I said yes. While I knew it would be about Madness, I didn’t know a podcast would rely so heavily on talking about things you know and/or being a bit of an expert. Being from Maine, I find expert pontificating abhorrent. I called my mother panicked. “Mum, I’m gonna have to talk a lot about Madness, people are gonna slay me!”

Laurie: But that hasn’t happened, has it? There have been no slayings. I think we have a good balance in our podcast. Poly knows a lot about 2Tone and the Jamaican ska scene, whereas I’m more into 80s pop culture. And that really seems to work! It would be boring as hell if we both approached music from the exact same perspective.

Laurie: There are tons of Madness web sites and online communities, but no one seemed to be creating original media content, or very little. It was important to us that we were content creators. Early on, Poly and I decided that we were not merely going to regurgitate Wikipedia entries. Instead, we wanted to do something completely original with a uniquely American spin. An audio podcast seemed like a natural fit since it allowed us to play snippets of the songs we were discussing.

Poly: We knew there would be song snippets and talking. “Do you like that song?” “Yup, I like that song.” That’s kinda how we started. Early on I came up with phrases like “strong melody” and “upbeat tempo” to describe songs I liked. Stupidly, I might add. Very nearly every good Madness song has a strong melody and upbeat tempo. What the f*** was I supposed to say about the subsequent two hundred songs? Idiot.

M.I.S.: What has been your favourite thing about recording the podcast this past year?

Poly: Special guests are definitely the best part of doing the podcasts. All the guests we’ve had were eager to talk. Less research to do, less carrying the load; it’s like a little vacation for me and Laurie.

Laurie: The guests have been terrific! We interviewed Chris Foreman for episode 15, which was arranged by our friends at M.I.S. That was absolutely a dream come true for me! But I think our real strength has been in getting interviews from other people whose stories haven’t been heard before. We interviewed Nick Woodgate, Woody’s brother, in episode 12, and our listeners really enjoyed that one. More recently we’ve chatted with Hector Walker (episode 16) and tour manager Steve Martin (episode 22). Those episodes were both fantastic! We have had listeners messaging us on social media to let us know that, although they are long-time fans who thought they knew all that there was to know about Madness, they were delighted to hear new stories from our guests.

Poly: I’ve been ecstatic to hear from fellow Madness fans who like the podcast. The Madness fan community has surprised me. Unlike other fan communities, they’re not a vicious bunch of trolls out to get each other. Friendly jabs, sure, but mostly supportive. I’m touched to hear how many take a drink when I say “absolutely” as a filler word or go get a beer when I say “Go get a beer, Stateside Madness.” Glad to know I’m enabling.

Laurie: Yeah, I think there may be a Stateside Madness Podcast drinking game out there now. Speaking of our fellow Maddies, the two fan engagement episodes which we’ve done so far have been an absolute blast (episode 8 and episode 21). Over the past year, I’ve become acutely aware of how many Madness fans there are here in the United States. We’re all about building the American fan community—through the podcast, through our Facebook group and Twitter, and through some planned meetups next year to coincide with the American tour dates.

M.I.S.: What can your listeners look forward to in the future?

Laurie: Well, in the immediate future we’re working on an episode all about Prince Buster, similar to the one we did on Ian Dury (episode 19). We’ve been talking about doing an episode about American bands who have cited Madness as a musical influence, like No Doubt and the Mighty Mighty Bosstones. And Poly really wants us to do an episode about the more adult side of Madness that he wants to call “Sexy Time for Madness.” That should be a good one, with lots of blushing involved.

Poly: We’ve got some more special guests in the works. Details are not hammered out, so it’s still secret. Other than that, I’d say we’re working on making the leap to video podcasts. Maybe not entirely but for special occasions, like The House of Fun Weekender; I’m gonna be there this year doing a podcast. Again, details are still being hammered out, but we’re gonna make it awesome.

M.I.S.: Anything else you’d like to say, either to the band or to the fans?

Poly: The podcast and Stateside Madness in general have been really fun and I’d say really good for me. The previous year has been challenging for everyone, and for me to have a project, scheduled meetings—and fun ones at that—was really helpful. I was never one to reach out to or chat up strangers, but SSM, M.I.S., Seven Ragged Men, and All Things Madness have forced me to be better about it. Odds are, I’ll make a lame reply to one of your posts sooner or later.

Laurie: It’s been so gratifying to me that people have taken the time to reach out and tell us, “I learned something new from your podcast,” and that people are listening and care what we have to say. We appreciate all the support we’ve received from M.I.S., Chris Foreman, Steve Martin, and others affiliated with the band. And thank you to our listeners! Without you, there would be no podcast. 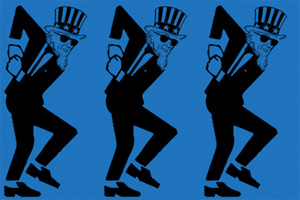